All the cocktails have left the building...

...and can now be found in a shiny new location right here: PartyCocktails.com/blog

The rest of MixShakeAndPour will be moving to PartyCocktails.com very soon.
Posted by Mix Shake and Pour at 3:17 PM No comments: 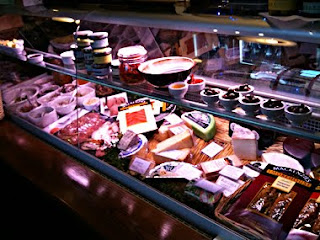 Market Town Taverns has been quietly building a reputation in Yorkshire for quality pubs that provide a decent alternative to the hugely commercial pub chains that in places seem to have a stranglehold on town and city drinking. The ten pubs of the 'Taverns group focus on quality beer and wine, most play no music and (most importantly) there are no TVs. One of the most recent Tavern openings was Veritas on Great George Street in Leeds. I'd heard the food was a little more special than the usual fair in other Tavern pubs, and recently got the chance to try it out. 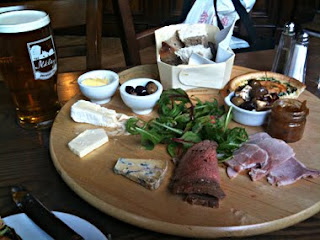 Niche Nosh is a catering company based at the pub that gives the venue something a little extra special. As well as doing event food they provide meals and a deli counter alongside the usual quality drinks to be found in a Market Towns Tavern. Starting with a pint of Ruby Mild from the Rudgate Brewery, I was quickly tempted by the delights of the deli counter and ordered a spread of nibbles that arrived on a Lazy Susan. Locally sourced, and put together with a lot of care and attention, the deli selection was outstanding. Cheeses on offer included the award winning Yorkshire Blue, Barncliffe Brie, both blue and white Wensleydales and a goats cheese from East Yorkshire. Other highlights included rich onion chutney, cold pressed rapeseed oil from Collingham and some tender, perfectly cooked cold meats. The service was excellent and the staff were happy to stop and discuss the menu and make recommendations. 7 items from the deli menu came in at just over a tenner. 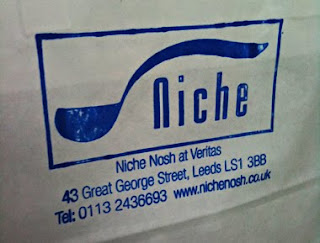 The only thing needed to round off a perfect meal (apart from a portion of rich sticky toffee pudding) was a pint of Ilkely Brewery's citrusy Mary Jane pale ale: a close second only to Thornbridge Hall Brewery's multi-award winning Jaipur IPA.
Posted by Mix Shake and Pour at 10:47 AM No comments:

As Google belately tries to keep its search results relevant, a number of alternatives are available, including the rather interesting Blekko. This new search engine allows you to narrow your search to lists of previously entered sites, labelled with what they call slashtags. With masses of poor cocktail websites out there, I've frequently been frustrated by Google searches.

Obviously there are different aims for searching the web. A completely open search will often be needed, for example when looking for some obscure information on a little known cocktail. However, the Blekko slashtag approach can be really handy when you want to weed out some of the poorer hits for more common search terms.

Try searching for Mai Tai in Google, and most of the top hits are for some pretty poor pages on this classic drink. Narrowing the search using my "/msp/cocktails" slashtag produces all the Mai Tai entries on my favourite 16 cocktail sites. Some I know, some I'd not seen before but best of all, no swamping of the results from the myriad of average cocktail web sites out there.
Posted by Mix Shake and Pour at 10:02 AM No comments:

Over the New Year I came across Fentiman's Tonic at a local farm shop. Despite being a fan of Fentiman's for years, this was the first time I'd encountered their Tonic Water. Launched back in 2007 (alongside small bottle versions of their coke and ginger beer lines) Fentiman's made similar statements to those from other alternative mixer producers. In short, the overly sweet, mass produced, corn fructose based mixers just don't cut it when combined with quality spirits. Sounds like common sense, so I was keen to try it out.

The mouth is watering. Export strength Tanqueray and wedges of lime are at the ready. Let the G&T's commence... Unfortunately it was a bit of a let down. Fentiman's cut back on the Quinine and added Lemongrass to their Tonic. The resulting G&T doesn't taste a lot like a G&T. The Lemongrass is pleasant but nearly obscures the weighty botanicals of the Gin (and this was with export Tanquer: no shrinking violet of the Gin family). With less Quinine than a typical tonic, the usual bite and character of the G&T is missing.

Like the other product's in Fentiman's line, this makes a quality soft drink to enjoy on its own. I love their classic Dandelion and Burdock or the spicy Ginger Beer on a hot summers day. But this really misses the target as the accompanient to a fine Gin.

I'm reluctant to draw conclusions from advertising material, but I wonder if the problem is a fundamental misunderstanding of this classic mixed drink. The first line of their poster reads "The gin and tonic is a drink with only two vital ingredients, the clue to which is in its name." Of course as any discerning G&T drinker will know, a wedge of lime or lemon is the essential third ingredient. Oh ok, ice makes it 4 essentials. A great Gin and Tonic requires a balance between a Gin with character, a subtle Tonic, and a burst of citrus juice. Destroy that balance and the drink is dead.
Posted by Mix Shake and Pour at 7:52 AM No comments: 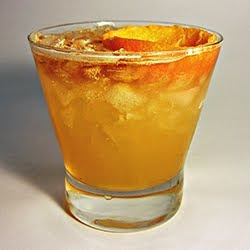 Constraints can sometimes lead to innovation, and the best part of this Tiki cocktail can be credited to a snow storm. Not a typical Tiki situation, I grant you. With the UK's weather taking a turn for the worse, getting out and stocking up on Lemons and Limes was out of the question. The only citrus fruits in the house were Tangerines but a Tiki drink was needed to momentarily escape the latest ice age gathering pace outside. Rum and Tangerine therefore became the natural starting point. A bit of experimentation resulted in the addition of a touch of Pineapple Juice and Passion Fruit syrup. A glance out of the window into the ongoing blizzard was the final inspiration required: an escape to warmer climes and a typically Tiki finish was needed. Float overproof Rum and garnish with half a spent Tangerine shell. The Anani Punch. Serve with lots of ice and excellent central heating.

Combine:
Shake with ice, serve over crushed ice in a rocks glass and garnish with half a spent Tangerine shell.
Posted by Mix Shake and Pour at 3:05 PM No comments: 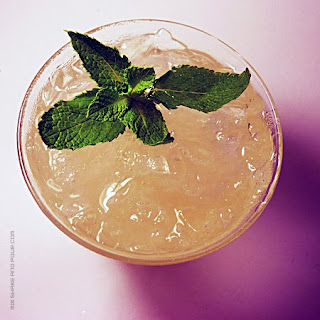 The Saturn is one of my favourite drinks from Jeff Berry's latest book on Tiki drinking: Beachbum Berry Remixed. Gin isn't usually at the top of the list for a Tiki drink, but it works wonderfully with the Falernum and the array of other flavours in the mix. I'm amazed its been paid such little attention by the online Tiki community since Berry brought it back from its sixties origins. Although those who have blogged about the Saturn have been pretty complimentary!

Creator of the Saturn is Popo Galsini, one of the cocktail luminaries featured on MSPs new Cocktail Experts page. This is certainly a work in progress but we've now got a decent foundation to develop this into a useful reference resource for the site. I'm really keen to build Mix Shake and Pour with lots of cross referencing and links to all the best cocktail information out there on the web. The creators of all those fabulous drinks are obviously a key piece of the cocktail puzzle. So who is missing? Be they cocktail legends or influential bloggers, who do you think should be added to the list?
Posted by Mix Shake and Pour at 4:02 PM No comments: 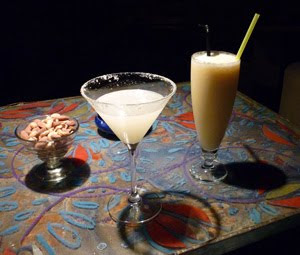 Drinking cocktails is not the first thing that springs to mind in a predominantly Muslim country, such as Morroco, but opportunities do exist. The bar at the hotel we were recently staying at used either cocktail pre-mixes or little judgement in their mixing. On requesting an off menu choice of a Mojito, we received all the right ingredients (and fresh ingredients at that) but not necessarily in all the right quantities. The result tasted of mint and little else. 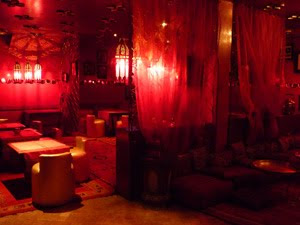 Venturing out into the bustling streets of Marrakech proved more fruitful, but not without some searching. The rabbit warren mazes of winding streets are not captured well on a map and the street names (only occasionally marked on signs) that have evolved over time often leave a mismatch between your directions, map, and where you actually are. Perseverance is definitely required. Eventually we located a couple of gems. First up was the sumptuously decorated Kosybar (47, Place des Ferblantiers, just around the corner from the Palais Badi). This city's drinking dens are all about the roof terraces and the Kosybar has one of the best. Just one small problem: no cocktails. Saviour can be found further north in the old town at Cafe Arabe (Rue de Mouassine). The elegant roof top terrace is the perfect place to watch the sunset and sample the menu of classic cocktails. Nothing fancy, just well made drinks with fresh ingredients. As we finally got up to leave, the call to prayer echoed across the rooftops. A reminder, if one were really needed, that most inhabitants of this incredible country certainly don't have cocktails on their mind. 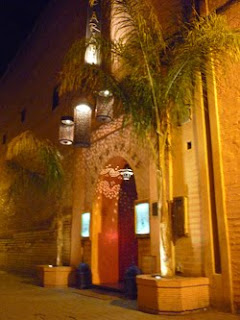 The latest cocktail recipes and updates from the Mix Shake and Pour cocktail website, as well as news and chat from the world of mixology.